Claimant to the title of « capital of Europe », the French city of Strasbourg is known all over Europe for its institutions like the European Council where hundreds of translators and interpreters help politicians communicate. But it is also the self-proclaimed capital city of Christmas, known all over the world for its numerous markets and its exquisite local food.

Located close to the German border, Strasbourg is part of the « Alsace » region where German is probably the most commonly spoken language after French and the local dialect « l’alsacien ». You’d think that language skills would be quite developed in such an international place. Yet, I spotted a funny translation blunder in a hotel in the city centre. As is sometimes the case, hotel owners resort to Google Translate when they only have a few words to translate (ex: instructions in the bathroom), either for financial reasons or just practical considerations. They probably think that given how short these sentences are, the machine cannot get them wrong… well, in this case a proofreader would have been put to good use… Granted, the message can still be well understood, but I reckon it’s not ideal and it reflects poorly on their image. When it’s bound to be pinned on the wall, it’s always best to have it proofread first.

But don’t let yourself be put off by the wrong grammar and get outside to soak in the magic and explore the numerous Christmas markets. Start with the one located in the borough called « La Petite France ». There, you’ll find the traditional half-timbered houses. Keep on walking and you’ll fin

ally end up in « Place Gutenberg » where they usually host a Christmas market honouring a European country. It changes every year.

It’s very close to the impressive cathedral where there is yet another Christmas market. Don’t forget to stop by the visitors’ centre. You can’t miss it, it is located in the building with massive gingerbread decorations.

And for all the fairy-tale lovers out there, under no circumstances whatsoever should you miss the boutique called « La maison de Hanssen & Gretel ». It is like stepping in a life-size dollhouse filled with Christmas decorations and magic. It’s located in a narrow street close to the cathedral. 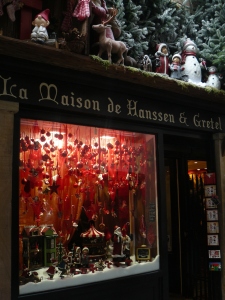 The most famous Christmas market remains the one called « Christkindelsmärik » in the pure German tradition. Don’t forget to sample some of the local food there! Anything with German-sounding names is bound to be delicious!

Find below a list of upcoming events dedicated to languages and cultures. Please note that it is not solely meant for professional linguists. Although it is mainly aimed at translators, LSPs, teachers, or any other language specialists, anyone interested in the subject is more than welcome!

27th to 28th | International Conference on Languages and the Market: Competitiveness and Employability in Estoril (Portugal)

12th to 13th | International Conference on Education, Culture and Society  in Toronto (Canada)